Google FB Pixel
It was to have been The Chancellor's big moment. The budget date set for the 6th November. Bonfire of the Sanities, the government was set on a spending spree to cut taxes and boost expenditure on health, education, defense and almost everything else for that matter. No time to fix the roof, the objective to please the electorate and return to power with a working majority to empower the front bench to back foot remainers in the house.

More police in the capital, mainly to escort members of parliament in and out of the office. It would have been a great occasion, with a few fireworks for good measure. Alas it was not to be. The Tory timetable began to fall apart as the Prime Minister failed in his attempt to leave the EU by the end of the month. Boris Johnson was committed to taking the EU out of the EU on Halloween. He had also committed not to ask for an extension to the Article 50 period.

The compression timetable to rush through the withdrawal agreement through the house was rejected. In the latest twist, the government announced on Thursday, the PM will let MPs give proper consideration to the  withdrawal bill, provided the House agrees to a general election on the 12th December. This "Quid Pro Quo" a "non sequitur", is causing confusion in the direction of travel for Labour and Tories apart.

The prospect of an election in December, rendered a November budget redundant. Probably just as well. The latest borrowing figures suggest the government is set to borrow over £50 billion in the current financial year. An increase of over 5% in spending in the year to date, led to a borrowing increase to £40 billion in the first half of the year compared to just £30 billion last year. Borrowing will exceed the 2% of GDP target attributed to fiscal prudence. No real room for tax cuts or for an increased in spending for that matter. The Chancellor will have to take time out to re write the guidelines for budget planning.

No time to fix the roof, the Chancellor is carrying an umbrella as he leaves Number 11 Downing Street. It is a subtle message about the financial largesse to follow perhaps ... 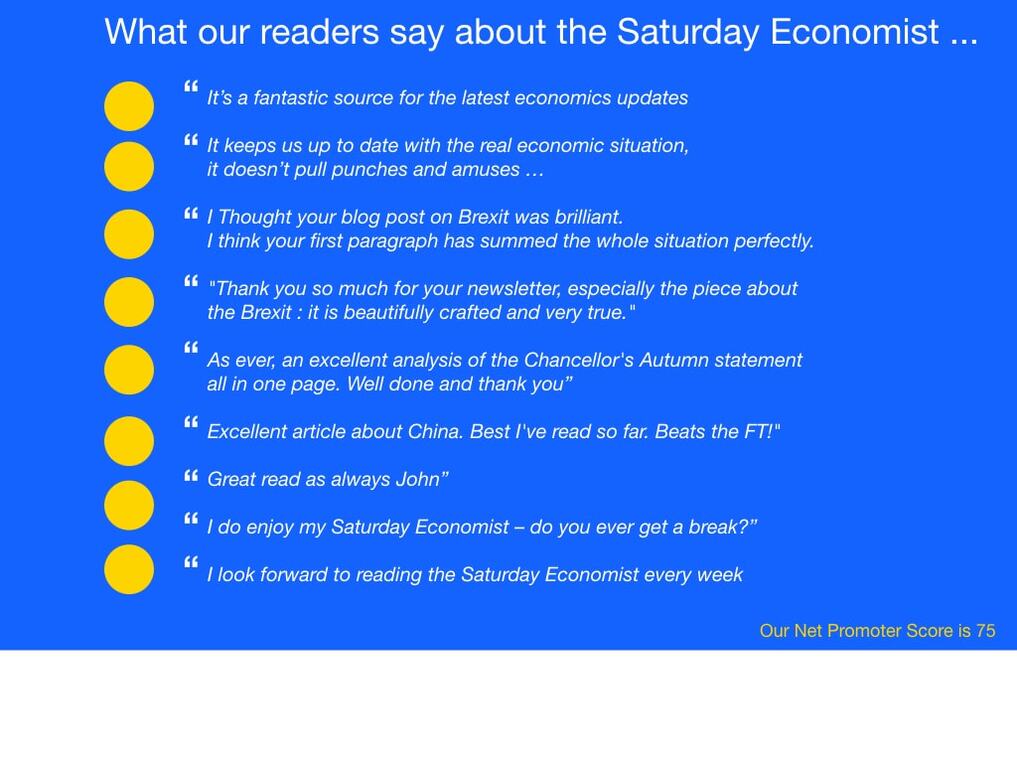 Each week over ten thousand subscribers receive The Saturday Economist, the free weekly update on the UK and world economy from me Dr John Ashcroft, PhD BSc.(Econ) FRSA.  Hard to believe I know but I have been studying economics since 1964 and have almost fifty years in business. If you are running a business, or have an interest in economics, check out The Saturday Economist - an objective  assessment of economics news as it happens. Free every week, no politics, no polemics, just facts!  Why not join the growing list of readers every week. Just click here, to sign up, don't miss out! John
The material is based upon information which we consider to be reliable but we do not represent that it is accurate or complete and it should not be relied upon as such. We accept no liability for errors, or omissions of opinion or fact. In particular, no reliance should be placed on the comments on trends in financial markets. The presentation should not be construed as the giving of investment advice.