Friday Forward Guidance ...
This is our Friday Forward Guidance for Friday 25th November. Every week we update our scenario forecasts for base rates in the U.S., UK and Europe over a three year period. We also include our expectations for inflation, as an input to the central bank reaction function, in the Saturday Economist updates. 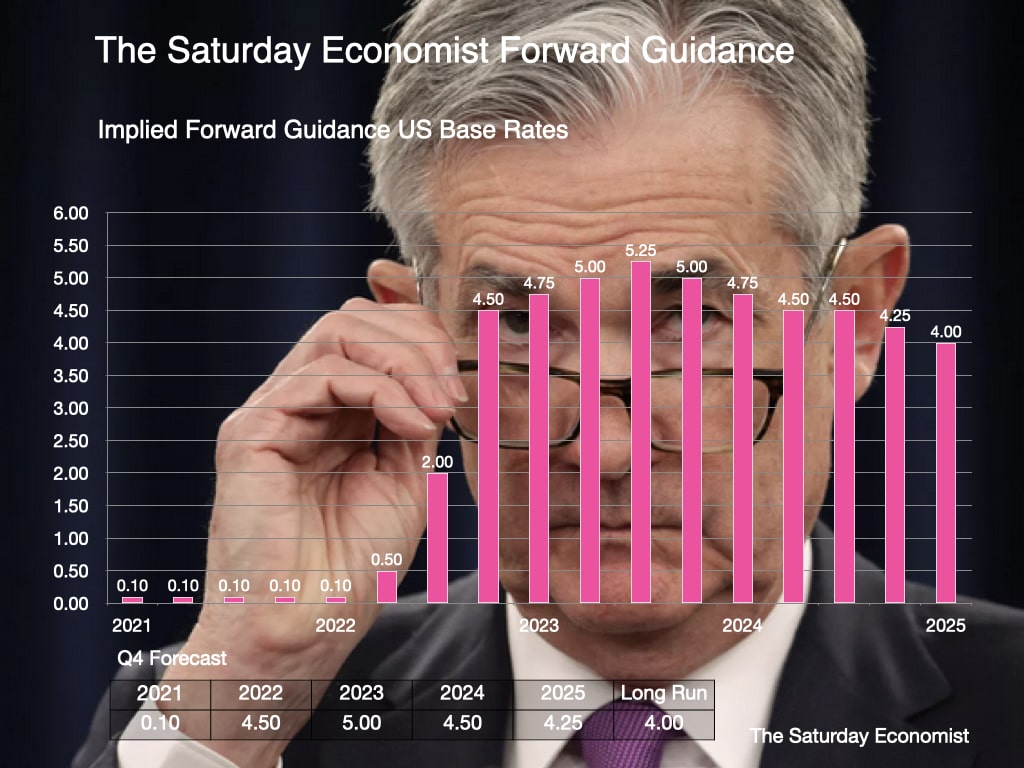 Fed Funds Rate ...
Inflation CPI eased to 7.7% in October from 8.2%  prior month. Producer price inflation eased back slightly in September to 8.5% from 8.7%.  Minutes of the latest FOMC minutes revealed, Federal Reserve officials expect to switch to smaller interest rate increases “soon,” according to minutes from the November meeting released Wednesday.

Some officials expressed concern over the impact rate increases could have on financial stability and the economy. Markets have largely expected the Fed to dial down the intensity of its policy tightening, and the minutes helped confirm that. A 50 bsis point rise seems likely in December.

No surprise when the Fed hiked rates by 75 basis points last month and this month . The target range for the Fed Funds rate increased to 4.00% to 4.25%. The Blue Dots were bouncing. The median projection for the appropriate level of the federal funds rate is now considered to be 4.4 percent at the end of this year, 1 percentage point higher than projected in June. The median projection rises to 4.6 percent at the end of next year and then eases to 3.9% by the end of 2024.

Jay Powell warned US interest rates would peak at a higher level than expected even as he held out the possibility of the Federal Reserve slowing the pace of its campaign to tighten monetary policy.

Speaking after the central bank increased its benchmark rate by 0.75 percentage points for the fourth time in a row on Wednesday, the Fed chair warned there was “some ways to go” in its quest to tame soaring prices and pointed to economic reports suggesting it had yet to make a dent in inflation.

However, Powell also hinted that policymakers were willing to entertain the possibility of a less aggressive increase at the Fed’s next meeting in December. “That time is coming, and it may come as soon as the next meeting, or the one after that,” he said

Forecasts for growth this year have been reduced  from 1.7% to 1.2% by the Fed. Projections for growth in 2023 are unchanged at 1.7%. Inflation CPE is expected to end the year at 5.4% slowing to 2.8% by the end of the following year. The drop in energy prices will ease the transition. The Fed forecasts appear optimistic. The September CPI data may disappoint we said. The U.S. jobs data confirmed the strength of the economy in the short term.

The latest GDP data confirmed the economy expanded by 1.8% in the third quarter of the year. In the first nine months of the year, the economy grew by an average 2.4%. We now expect growth of 2.2% for the year as a whole, with 1.5% growth in prospect for 2023. The pressure on the Fed to maintain the rate rise programme will continue.

This is our "We are leaving Planet ZIRP" scenario. Grab a ticket for the flight, don't forget the cancellation insurance. The Fed may yet lose the plot. 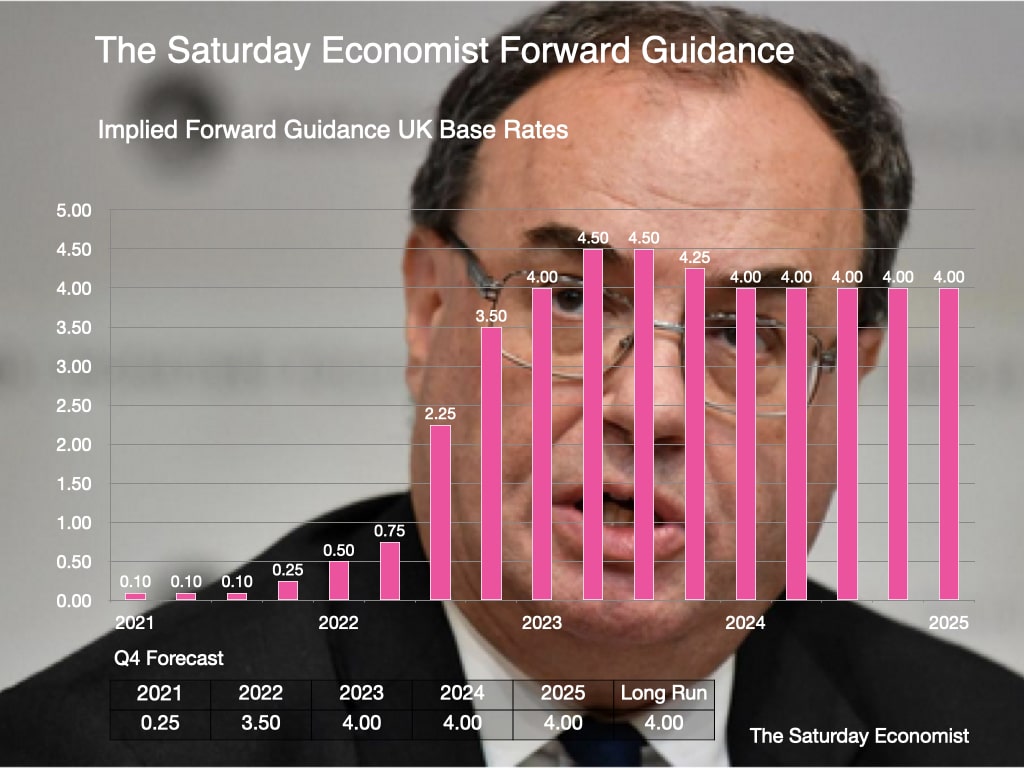 Bank Base Rate...
Inflation, CPI moved higher in October to 11.1%  from 10.1% in September. Producer output prices eased to 14.8%, cost prices eased to 19..2%. The OBR expects inflation to peak at the 11% level in the final quarter of the year. The energy price cap will mitigate the inflation peaks.  The weakness of oil prices will ease the task. We expect Brent Crude prices to average $95 dollars over the three month period.

Money markets are pricing in the probability of one further consecutive 50 basis-point increases from the Bank of England before the end of the year, drastically increasing the pace of monetary tightening. The UK’s Bank rate will increase to over 4.00% by Easter and 4.50% by the middle of the year. Suggestions rates may have to rise to 5% plus appear to be an over reaction ahead of the miini budget.

Ben Broadbent, the deputy governor of the Bank of England, had suggested that interest rates may not rise by as much as feared as the economic outlook darkens and a recession looms. The Bank's actions will depend on how much the Government boosts demand by intervening to support households, he said: "Whether official interest rates have to rise by quite as much as currently priced in financial markets remains to be seen."

Dave Ramsden  said this week he thought the BoE still needed to tighten monetary policy. “I expect that further increases in the bank rate are going to be required to ensure a sustainable return of inflation to target."

The latest GDP data suggests the UK is not (yet) in recession. Growth was up 1.3% in September year on year, despite the fall in the month on month comparison. Growth in Q3 year on year was 2.4%. 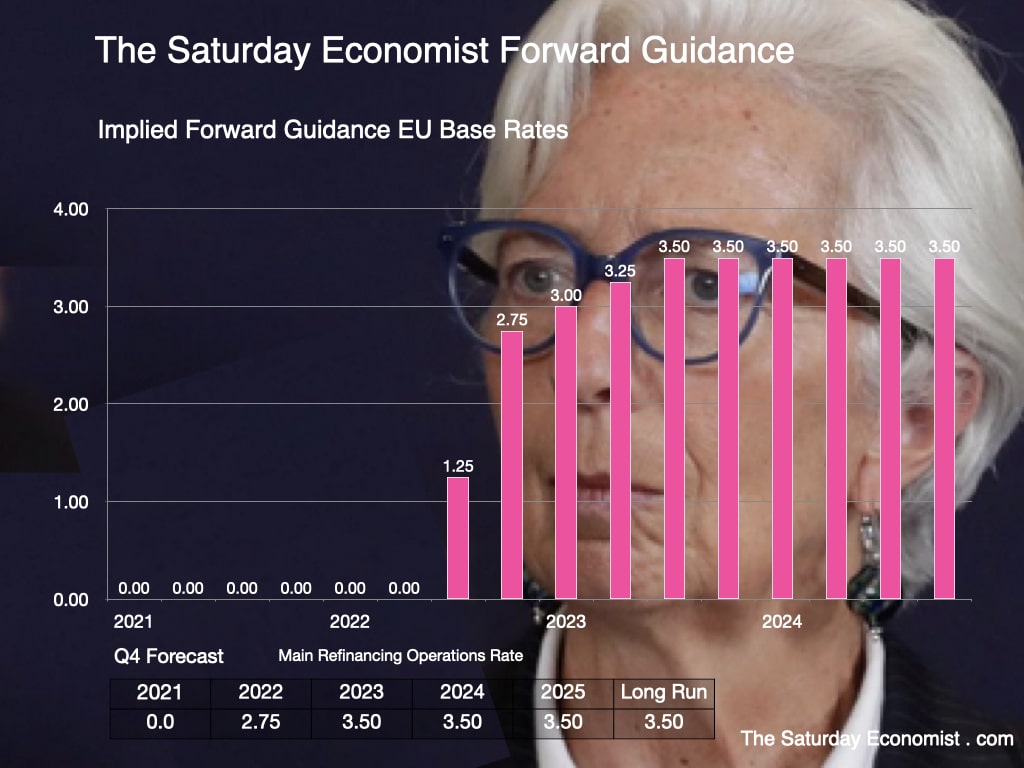 The account of the central bank’s October governing council meeting, where rates were raised by 75 basis points, shows policymakers agreed that a modest downturn would not be enough to force it to pause on monetary tightening. The European Central Bank will continue to raise interest rates even in a “shallow” recession, doubling-down on its hawkish message on inflation.

The European Central Bank raised interest rates by 75 basis points last month, the largest move in history for the ECB. "This is a major step to make sure inflation returns to our 2% target. More steps will follow. They will depend on how the inflation outlook develops." The ECB minutes expressed real concerns about entrenched inflation.

"The interest rate on the main refinancing operations and the interest rates on the marginal lending facility and the deposit facility will be increased to 2.00%, 2.25% and 1.50% respectively, with effect from 2 November 2022".

If our expectations for US and UK rates hold, Euro rates (marginal lending facility basis) could close at 2.75% by the end of 2022, rising to 3.50% at the end of 2023. This would still mean Euro rates are lagging U.S. and U.K. rates significantly, suggesting pressure on the Euro will continue, or the ECB will move more aggressively to narrow the rate gap. We expect upward revisions to the European rates outlook, despite growing fears of recession. 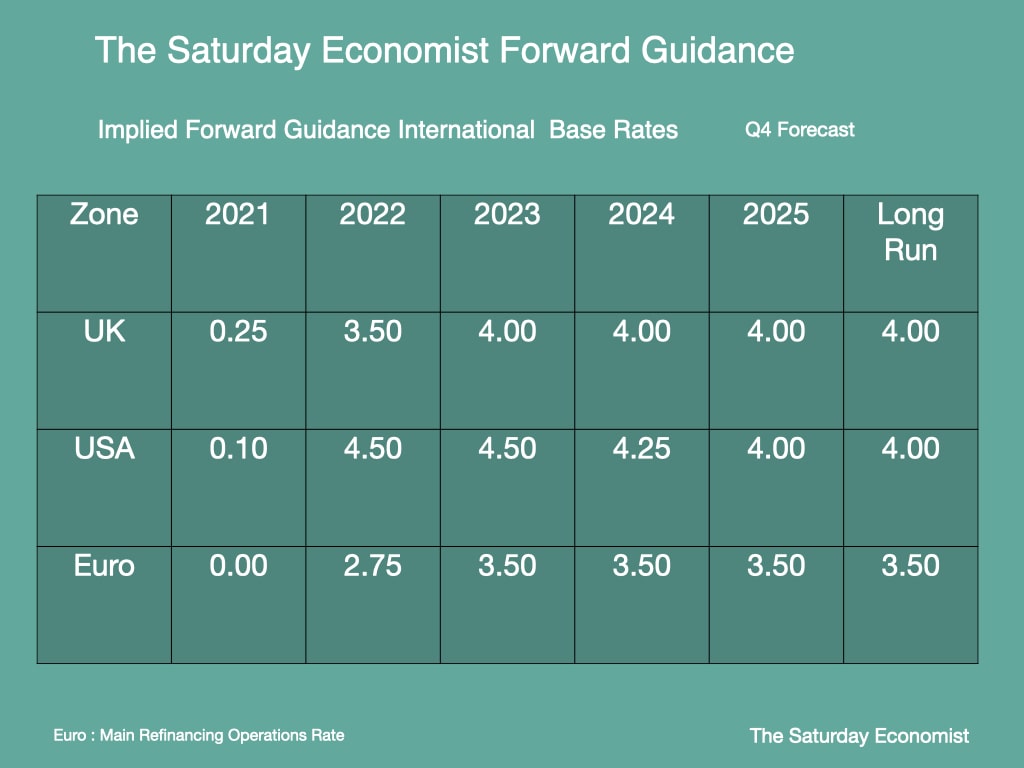 Scenario Comparisons ...
This is the table of scenario comparisons. We would expect UK rates to lag not lead the US pattern. EU rates would follow the US/UK lead. Inflation may subside sooner than expected. Central banks may worry about the shock to growth. This is a scenario not the plan.

We model the long run rate at 4.0%. The Fed Blue dot projections assume 3.50% as the perceived long run rate. In the UK, prior to the Great Financial Crash [2000 - 2008] the average inflation rate was 2.0%, the average UK bank rate was 4.50%. Ten year bond yields averaged 4.50%. Some way to go yet, in the return to normality!
The material is based upon information which we consider to be reliable but we do not represent that it is accurate or complete and it should not be relied upon as such. We accept no liability for errors, or omissions of opinion or fact. In particular, no reliance should be placed on the comments on trends in financial markets. The presentation should not be construed as the giving of investment advice.