Friday Forward Guidance ...
This is our Friday Forward Guidance for Friday 12th August . Every week we update our scenario forecasts for base rates in the U.S. UK and Europe over a three year period. We also include our expectations for inflation, as an input to the central bank reaction function, in the Saturday Economist updates. 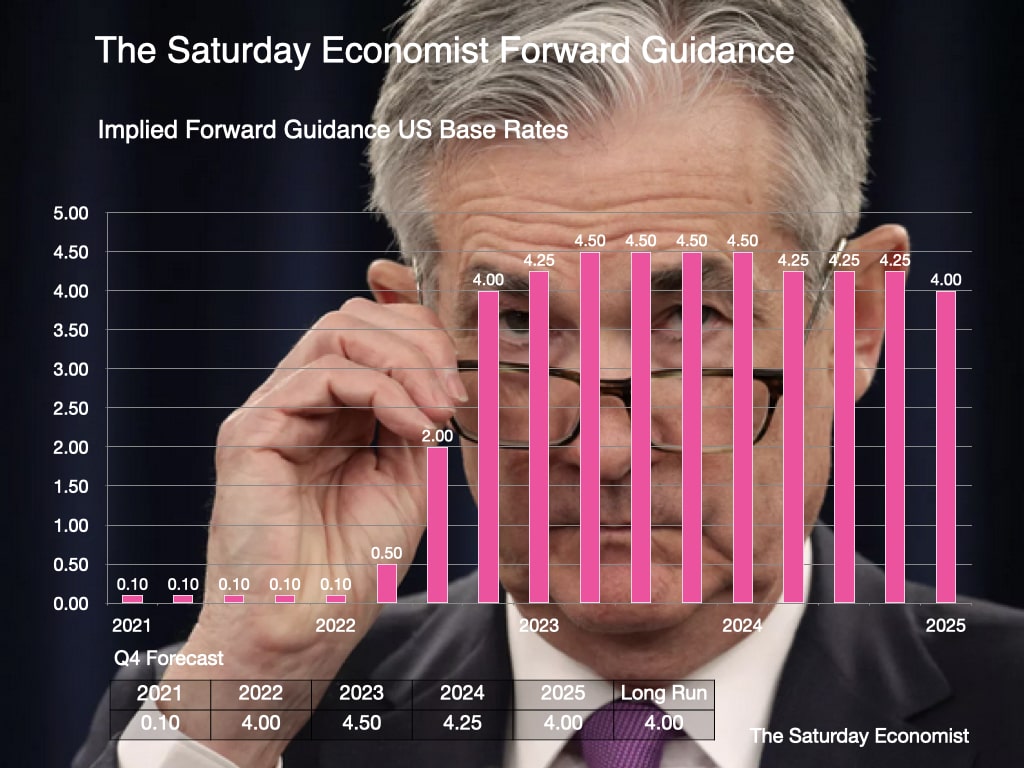 'At the latest meeting the Committee raised the target range for the federal funds rate by 3/4 percentage point, bringing the target range to 2-1/4 to 2-1/2 percent. The increase in the target range is the second 75 basis point increase in as many meetings. While another unusually large increase could be appropriate at our next meeting, that is a decision that will depend on the data we get between now and then."

Markets are mixed as to a 50 or 75 basis point rise in the September meeting.

“The idea that we’re going to start cutting rates early next year, when inflation is very likely going to be well in excess of our target, I just think it’s unrealistic,” Minneapolis Fed president Neel Kashkari said.

This is our "We are leaving Planet ZIRP" scenario. Grab a ticket for the flight, don't forget the cancellation insurance. 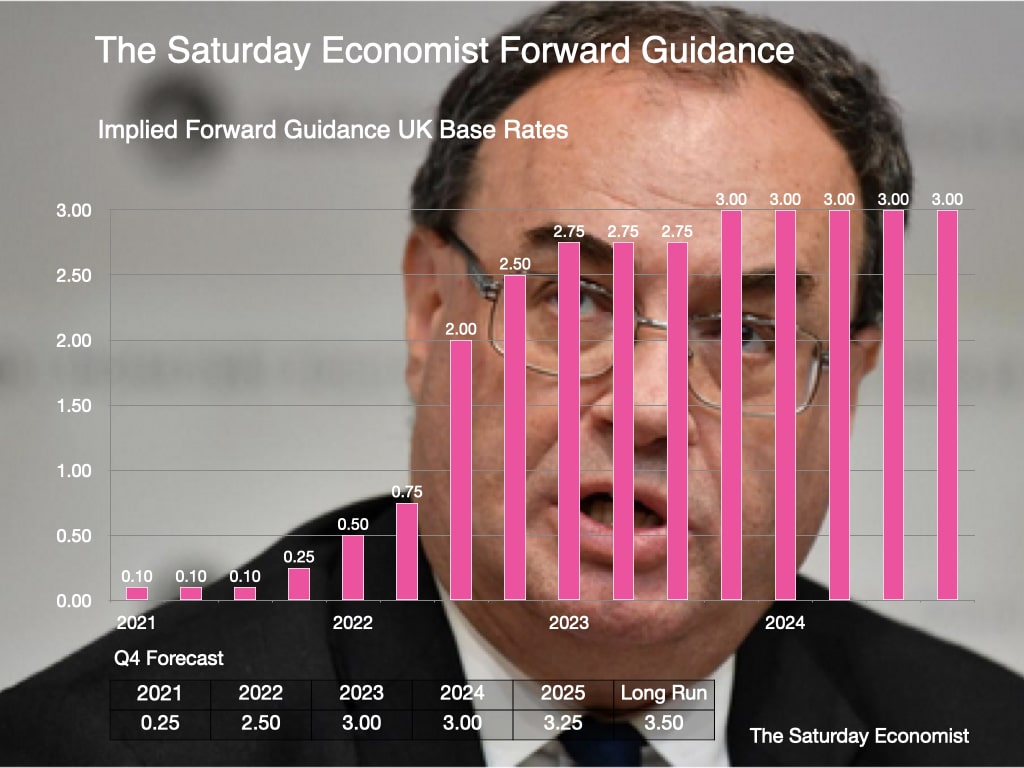 "The MPC will take the actions necessary to return inflation to the 2% target sustainably in the medium term, in line with its remit. The scale, pace and timing of any further increases in Bank Rate will reflect the Committee’s assessment of the economic outlook and inflationary pressures."

The market-implied path for bank rate suggests 3.00% could be the level achieved this year. For the moment we remain cautious. The August hike was not a unanimous decision.  One member voted for a 25 point hike. The Governor and MPC members remain cautious of the downside risks to recession. The governor warns action will be taken to bear down on inflation despite risks of slowdown.

We remain slightly more cautious in view of the downside risks to growth. The Bank of England forecasts suggest the UK will enter into recession in the final quarter of 2022, continuing for five consecutive quarters as growth slows and unemployment is on the increase. 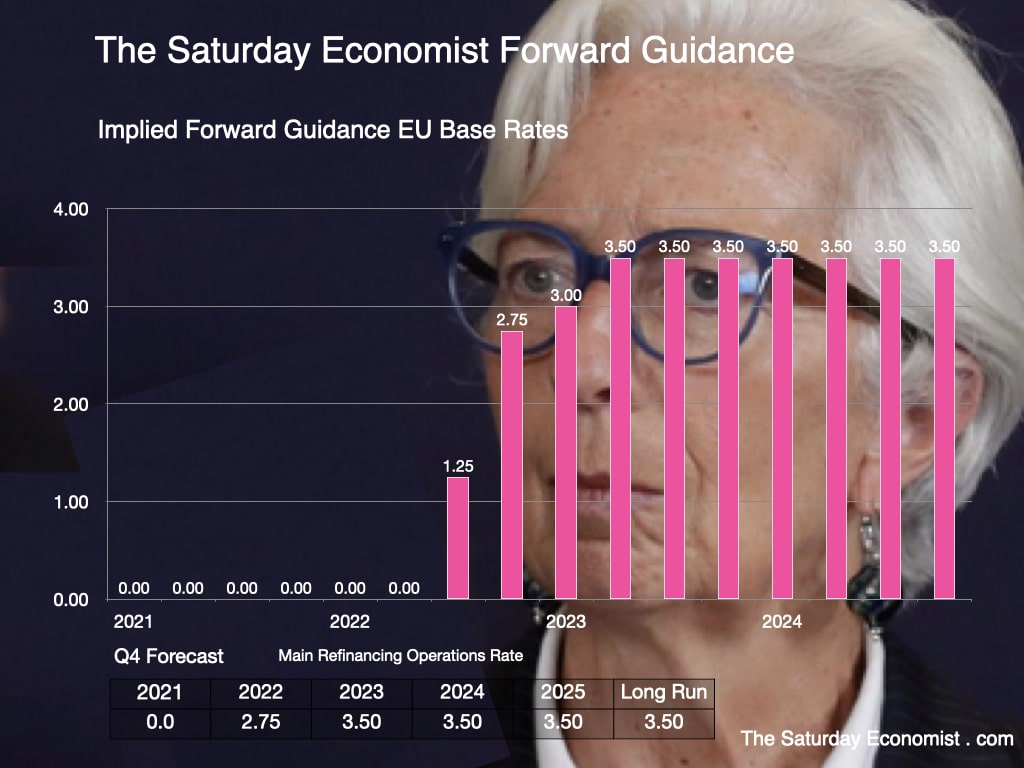 Euro Base Rate...
Euro area annual inflation hit 8.9% in July 2022  according to latest data from Eurostat, the statistical office of the European Union.  The Euro grew by 4% in the second quarter, with a strong performance in France, Italy and Spain.

The European Central Bank raised interest rates by half a percentage point this month, the first increase for more than a decade. The fundamentals are in place for further increases to follow.

The ECB said it “judged that it is appropriate to take a larger first step on its policy rate normalization path than signaled at its previous meeting” because of higher than expected inflation and the support of its new bond-buying scheme.

The central bank said rates would rise further in future meetings, adding: “The front loading today of the exit from negative interest rates allows the governing council to make a transition to a meeting-by-meeting approach to interest .

If our expectations for US and UK rates hold, Euro rates (marginal lending facility basis) could close at 1.00% by the end of 2022, rising to 1.50% at the end of 2023. This would still mean Euro rates are lagging U.S. and U.K. rates significantly, suggesting pressure on the Euro will continue, or the ECB will move more aggressively to narrow the rate gap. We may revise the forecasts up to 1.50% by the end of the year in the coming weeks wwith 2.5% in prospect for 2023.

China Syndrome ...
Growth in the second quarter eased to 0.4%. The official GDP target of “around 5.5%” was announced in early March. Major investment banks have repeatedly cut their full-year China GDP targets. Among firms tracked by CNBC, the median forecast was 3.4% as of late June. “China’s economy is no doubt bottoming. But it is still in the midst of its recovery,” said Bruce Pang, chief economist and head of research, Greater China, JLL.

We expect further monetary easing in 2022, including another 100 bps of cuts in the required reserve ratio and 20 bps of reductions in the PBOC’s one-year medium-term lending facility rate, the base for the Loan Prime Rate (3.80% December 3.85% January to November 2021) 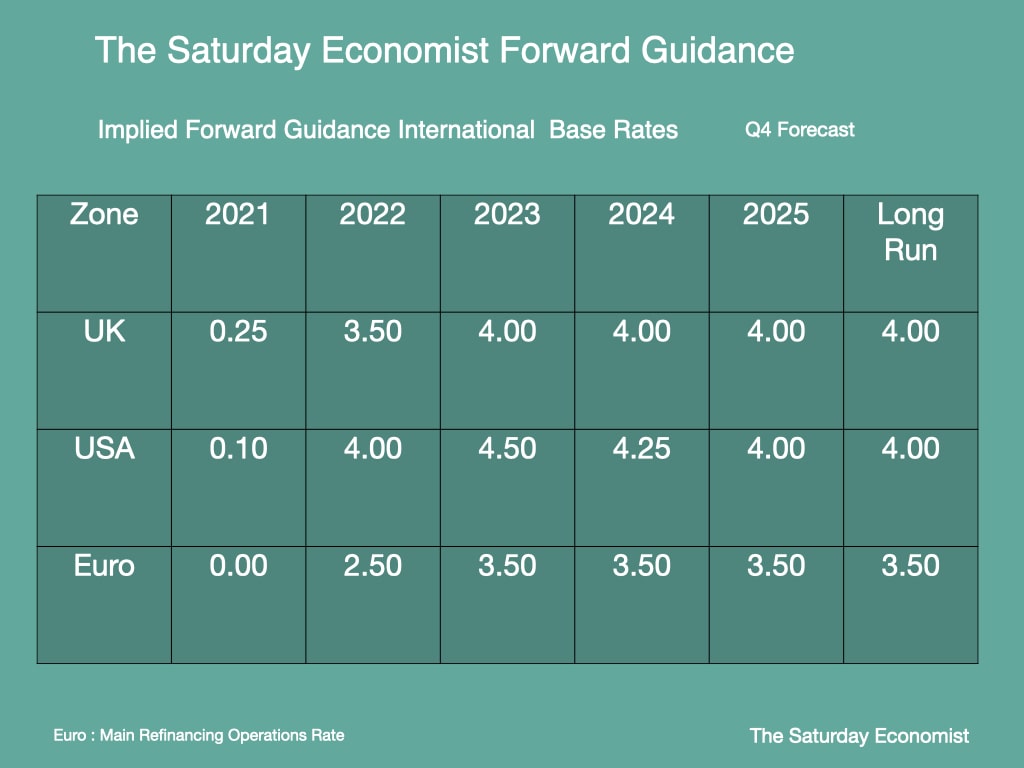 Scenario Comparisons ...
This is the table of scenario comparisons. We would expect UK rates to lag not lead the US pattern. EU rates would follow the US/UK lead. Inflation may subside sooner than expected. Central banks may worry about the shock to growth. The escape from Planet ZIRP could be aborted. This is a scenario not the plan.

We model the long run rate at 3.50%. The Fed Blue dot projections assume 2.50% as the perceived long run rate. In the UK, prior to the Great Financial Crash [2000 - 2008] the average inflation rate was 2.0%, the average UK bank rate was 4.50%. Ten year bond yields averaged 4.50%. Some way to go yet!
The material is based upon information which we consider to be reliable but we do not represent that it is accurate or complete and it should not be relied upon as such. We accept no liability for errors, or omissions of opinion or fact. In particular, no reliance should be placed on the comments on trends in financial markets. The presentation should not be construed as the giving of investment advice.